Roommates, after teasing fans since late last year, Netflix is closer than ever to dropping its highly-anticipated series about slain Tejano singer Selena. The streaming service finally dropped the official full-length trailer for the show—which provides an even closer look at Christian Serratos in the lead role of Selena Quintanilla.

As the debut of “Selena: The Series” nears closer to its December 4th release date, Netflix has released the show’s first extended trailer. “The Walking Dead” star Christian Serratos portrays Selena Quintanilla, the Queen of Tejano Music, in the nine-episode biographical drama that documents her early years, rise to fame and tragic murder.

“Selena: The Series” creator and executive producer Moisés Zamora spoke about what fans can expect to see from the project:

“I can’t tell you exactly the time frame we will cover but I can say we have a lot of special surprises coming up. Fans can expect to see us go into the depths of this family’s journey, including their early days going from gig-to-gig. Selena was on the road since she was like 11 or 12 and it was truly a family affair. You’ll see her coming of age as she transforms into the incredibly confident superstar everyone knows and loves. We will dive into the family dynamics and will show some interesting things people don’t know about the Quintanillas.”

“Selena: The Series” costars Madison Taylor Baez, who plays Selena in the show’s earlier scenes. The Quintanilla family will be portrayed by Ricardo Chavira, as Selena’s father, Abraham; Seidy Lopez, as her the singer’s mother, Marcella; Gabriel Chavarria, who stars as her brother, A.B.; and Noemi Gonzalez as her sister, Suzette, who served as series executive producer. Selena’s husband Chris Perez will be played by Jesse Posey. “On My Block” star Julio Macias stars as Pete Astudillo. 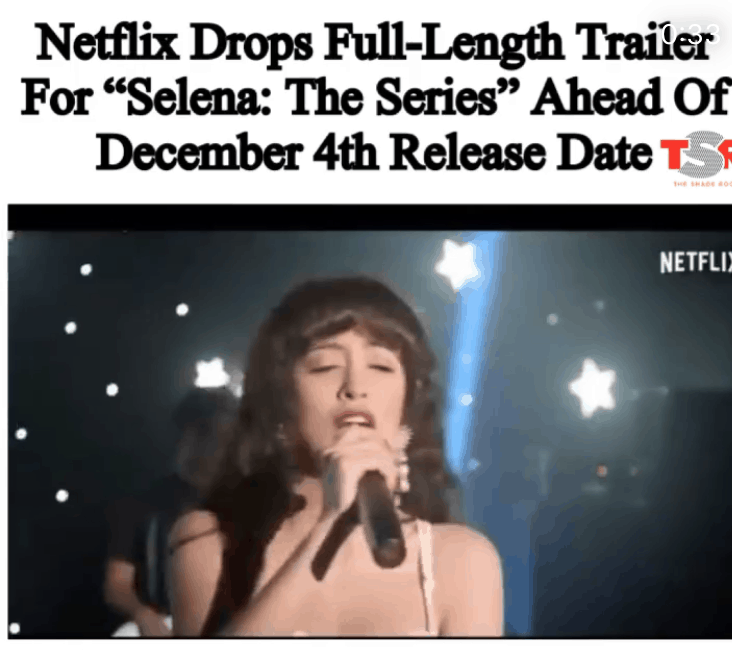 The post Netflix Drops Full-Length Trailer For “Selena: The Series” Ahead Of December 4th Release Date appeared first on The Shade Room.