Roommates, Lamar Odom’s ex and the mother of his children, Liza Morales is rumored to be joining the upcoming 9th season of VH1’s hit series “Basketball Wives”—and  before she hits TV screens she’s airing out Lamar and his fiancée Sabrina Parr. Liza took to her Instagram to state that not only is Lamar not fulfilling his duties as a father, but Sabrina is posting fake IG messages.

As the upcoming season of “Basketball Wives” continues to film, production sources recently revealed that Liza Morales has joined the cast. She is rumored to be one of three new cast members this season, which will be filmed with COVID-19 safety precautions that will give the show a completely different vibe. “The cast will be holed up in two separate houses during production. They will not be allowed to leave the bubble set in place by production,” according to reports.

Liza posted a series of Instagram stories, seemingly firing shots at Sabrina. In the posts, Liza subliminally accused Sabrina of writing all of the captions for Lamar’s posts about her.

Additionally, she also questioned why she hasn’t received any money from Lamar to pay for their son’s college tuition. In one of the posts, she used the word “baby doll,” which is a pet name Lamar uses in his captions about Sabrina.

In case you need a refresher, Liza Morales was in a relationship with Lamar Odom for several years after they met in high school. During the course of their relationship, they had a daughter Destiny and a son Lamar Jr—they had a third child, Jayden, who died when he was 6 months old.

After they called it quits, Lamar famously married Khloe Kardashian and is now engaged to fitness expert Sabrina Parr. 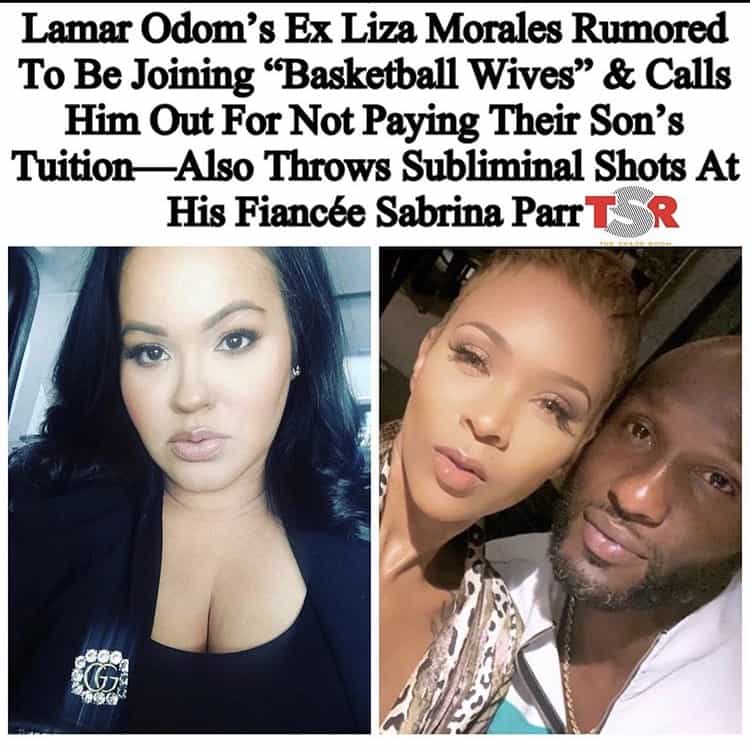 The post Lamar Odom’s Ex Liza Morales Rumored To Be Joining “Basketball Wives” & Calls Him Out For Not Paying Their Son’s Tuition—Also Throws Subliminal Shots At His Fiancée Sabrina Parr appeared first on The Shade Room.