Roommates, it’s not every day that Kamala Harris, the first black woman VP nominee for a major ticket, and the second black woman ever elected to the U.S. Senate, steps into The Shade Room! However, that’s exactly what happened and she discussed all the hot topics with us that voters want to know as Election Days gets closer.

Kamala Harris went live from her alma mater Howard University to discuss her plans to reform the criminal justice system, cut taxes for the middle class, and invest billions of dollars in predominantly black-owned businesses. She clapped back on the “$400k and up” tax discussion that has a few rappers in our community hot and bothered.

Kamala also said, “Donald Trump came into office and passed a tax bill benefiting the top 1 percent and the biggest corporations in America- resulting in a $2 trillion deficit that everybody is going to have to pay for.”

She continued, explaining that one of her biggest focuses is building wealth in the black community, considering the average black family holds only 1/10th of the wealth of other families.

In a round of good news, multiple national voting polls and estimates show that Joe Biden and Kamala Harris are currently leading rival Donald Trump.

Roomies, November 3rd is creeping up on us- regardless of who you’re voting for, check iWillVote.com to see where you can cast your vote by next Tuesday! 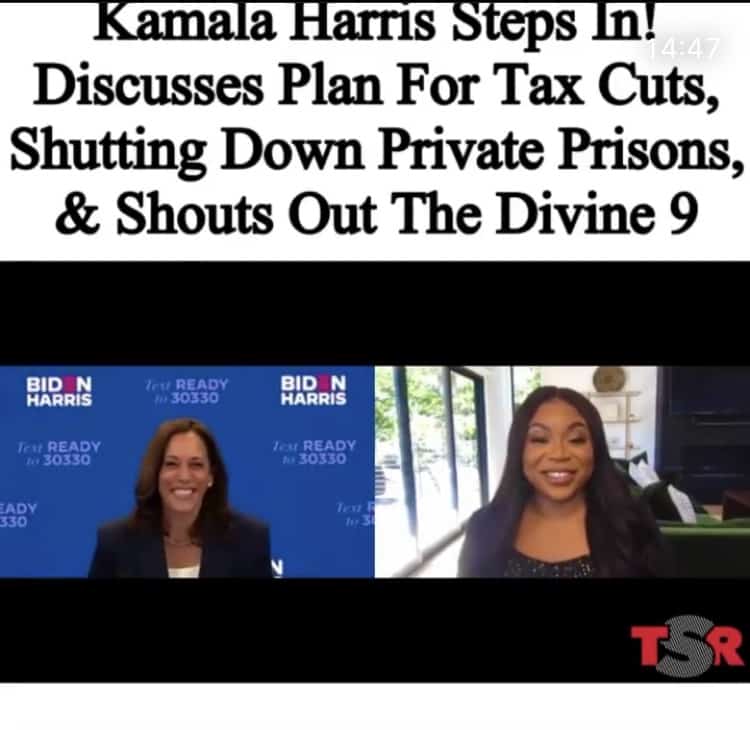 The post Kamala Harris Steps Into The Shade Room! Discusses Plan For Tax Cuts, Shutting Down Private Prisons & Shouts Out The Divine 9 appeared first on The Shade Room.