Roommates, with the announcement that season two of Verzuz is on the way, many fans have been dreaming up their ideal match-ups—and that includes Busta Rhymes calling out T.I. to go head-to-head. However, after T.I. declined to battle Busta because he didn’t think they were from the same era, Busta has continued to playfully call him out.

In a series of videos posted to his Instagram, Busta Rhymes let T.I. know that although he might have turned down his request for a Verzuz battle, he definitely isn’t immune to being playfully roasted and taunted.

Busta had this to say to T.I.:

“You a king, I’m a God. You lookin’ like a King and runnin’ ya mouth more than lookin’ like a King of the South. I never asked to do a Verzuz with you, my brother. I did an interview with Fat Joe on the big show and we had a Joprah moment. See, I know you love me. And I love you, and you know I love you. You my brother. The way we can joke and have fun like this is because we brothers. But all jokes aside, I’m not playing when it comes to respectfully competing. I will bust you’re a**, for real. And I will bust you’re a** at any given point and time you want to revisit this. I was asked if, as a New York MC, if the opportunity presented itself to take on you in a Verzuz, and of course I’m going to accept that s**t with grace and open arms and welcome it in the most warm fashion I’m supposed to.”

He continued, saying “Focus on your Jeezy battle brother. Cause if you take that L, you think we having fun now? I’m gonna bust you’re a** playboy, you got s**t you need to do to prepare for that.”

In case you missed it, T.I. and Jeezy have been confirmed to be the next to go head-to-head in a Verzuz battle next month. 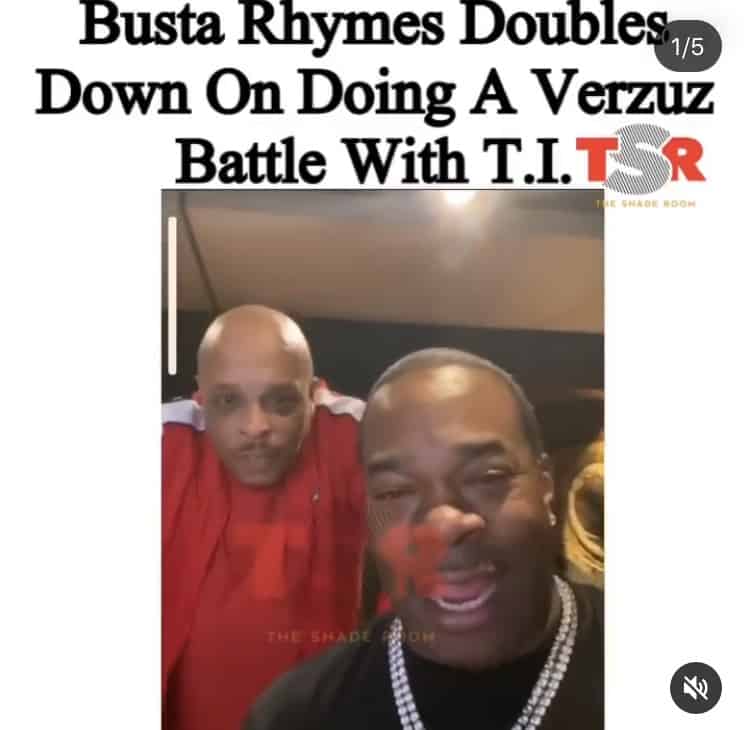 The post Busta Rhymes Continues To Playfully Call Out T.I. For Declining To Battle Him In Verzuz appeared first on The Shade Room.