Meghan Markle could have put herself and Prince Harry at risk when she awkwardly refused to hand her bouquet of flowers to royal aides over the weekend, according to a royal expert.

The Duke and Duchess of Sussex reunited with Prince William and Kate Middleton for a walkabout outside Windsor Castle on Saturday, where they brought flowers to lay in honor of Queen Elizabeth II.

But Markle, 41, raised eyebrows when she was caught on video telling an aide she didn’t want to hand off her flowers — and it took a second aide to get the former actress to relinquish the bouquet.

“From my perceptive, it makes sense [Meghan and Harry] wouldn’t be holding on to large items given to them from the public just on a security level,” royal expert and political commentator Jonathan Sacerdoti told Page Six on Tuesday.

Sacerdoti shared that it is common practice for members of the royal family to follow protocol, especially during high-security-risk moments such as their Windsor walkabout.

“They should have been guided by aides. Everybody in the royal family who’s taking part in the mourning process is obviously in a stressful position, and they’re all relying on the team of advisers and planners who are working with them. So I think it would be normal to take the advice and just go along with the plans put in place,” he said.

The UK-based royal commentator also noted that the Prince and Princess of Wales, both 40, had no issues adhering to the royal aides’ requests.

“William and Kate know how things are done. They take the bouquet and they pass them to the aides close behind them. They can’t carry all those flowers. The aides are going to put them with the other tributes,” Sacerdoti said, adding, “There can be a security risk handing things off.”

Sacerdoti found the incident particularly interesting considering the Sussexes’ massive concern over their security situation in the UK. As Page Six previously reported, Harry, 37, has been battling with the UK government over not having enough security across the pond since resigning from the royal family.

“When they go into these situations, it’s a higher-risk security situation because they’re high-profile people, and they are the very people complaining about their security, so to not take the advice from the people there to handle you is risky,” he said.

It wasn’t clear why Markle didn’t want to hand off the flowers, but some believe it was all for optics. 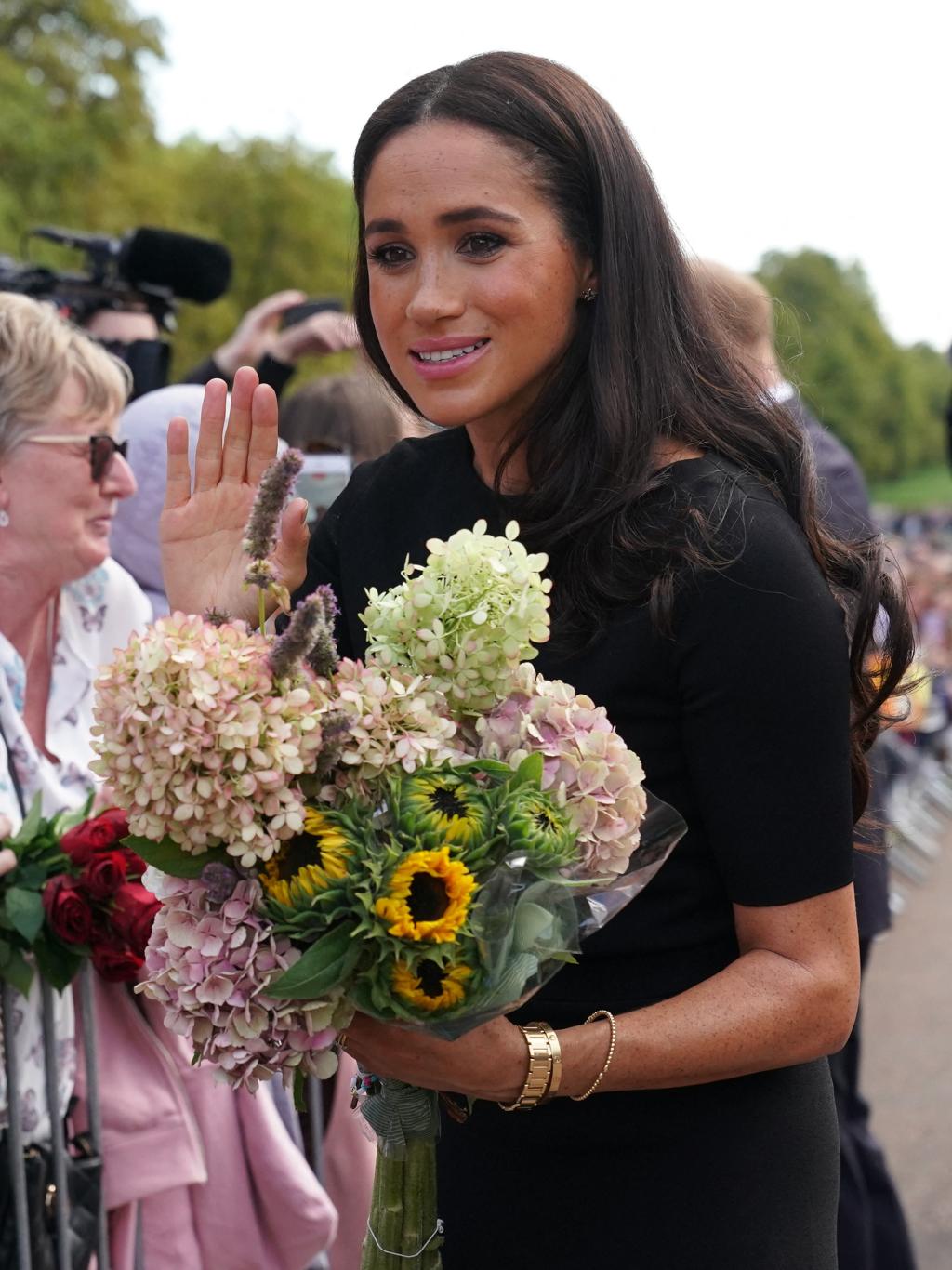 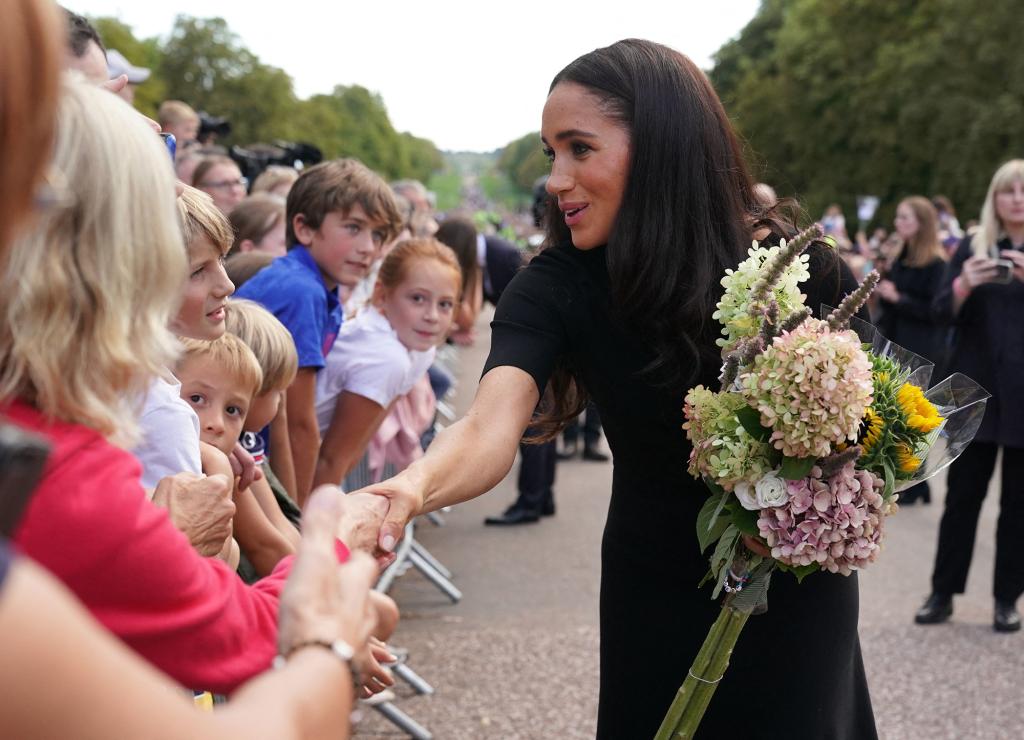 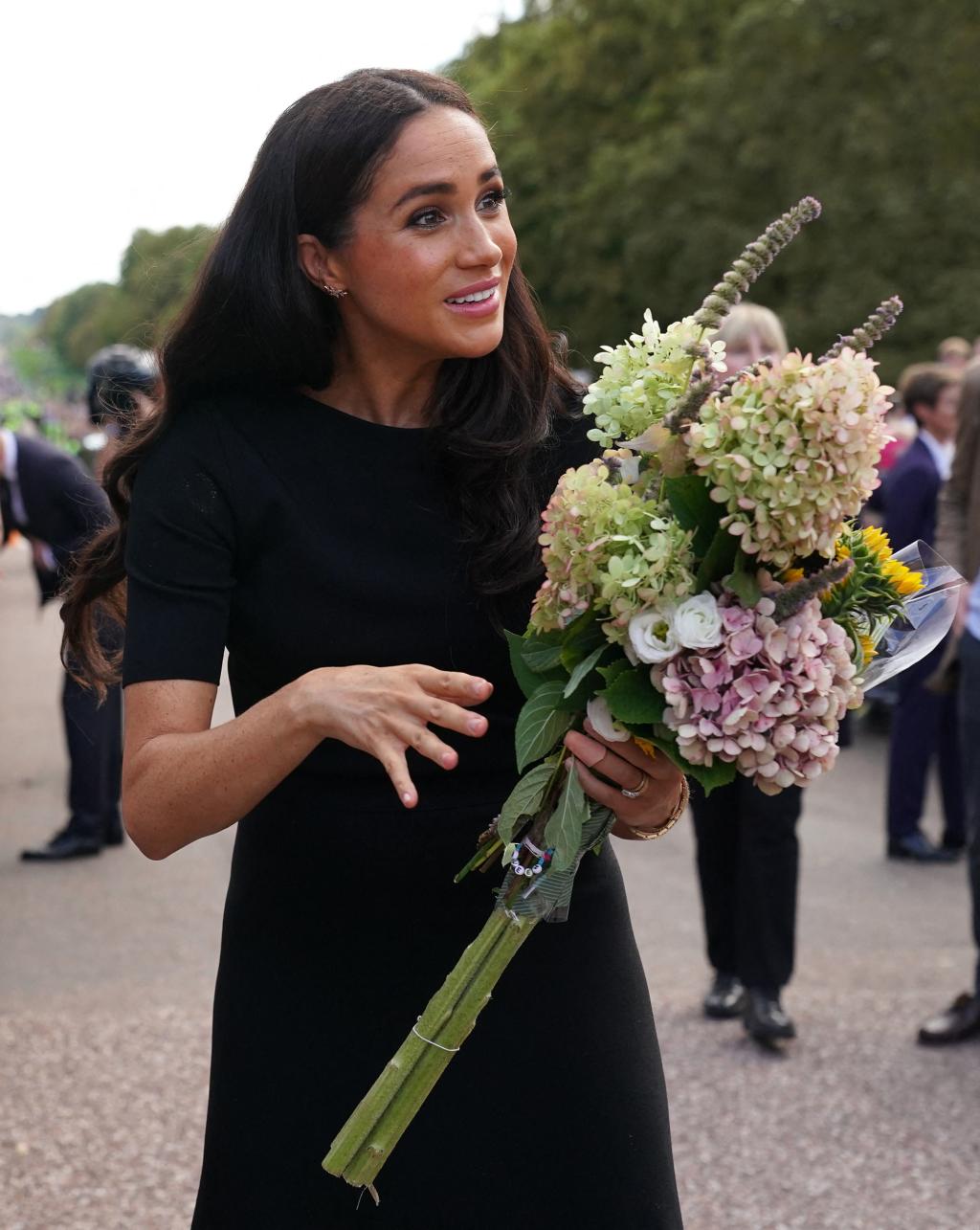 “There is no question that [Meghan] was in fear, as…

“Why that is she didn’t want to give her flowers off? We don’t know,” Sacerdoti said, noting that it could be because Markle “wanted to be seen with the flowers” or having an “iconic photo” moment where she is “kneeling down herself putting them down.”

The British journalist also highlighted that breaking protocol is nothing new for Markle, as she’s gained much attention for going against the royal family for years.

“It generally makes sense to follow the rules, but I don’t think Meghan Markle likes following the rules, especially when they’re British rules,” he said, adding that days of mourning aren’t the time for breaking rules.

“This is the moment for being part of the team, blending in, taking part of the burden off everyone else. They were doing that, to be fair to them, but it’s a question of how you do it.”

He continued, “That’s why people were worried about the presence of Meghan Markle. Because this moment is all about the Queen’s contribution and it shouldn’t be about us discussing Meghan Markle.”

Sacerdoti said it was appropriate for Markle to attend the tribute because she is “part of the family,” but thinks she shouldn’t take away from honoring the longest-reigning British monarch.

“We just hope we can focus on the late Queen and the new king,” he said.

Markle and Harry’s appearance with William and Kate was already a topic of discussion as it was the first time the foursome has made a public appearance together since March 2020 on Commonwealth Day.

The Queen died last week at the age of 96. While Markle has yet to release an official statement, her husband shared a touching tribute about his grandma this week.

“Granny, while this final parting brings us great sadness, I am forever grateful for all of our first meetings — from my earliest childhood memories with you, to meeting you for the first time as my commander-in-chief, to the first moment you met my darling wife and hugged your beloved great-grandchildren,” he said in a statement shared to the Archewell foundation website.

Harry added, “I cherish these times shared with you, and the many other special moments in between. You are already sorely missed.”