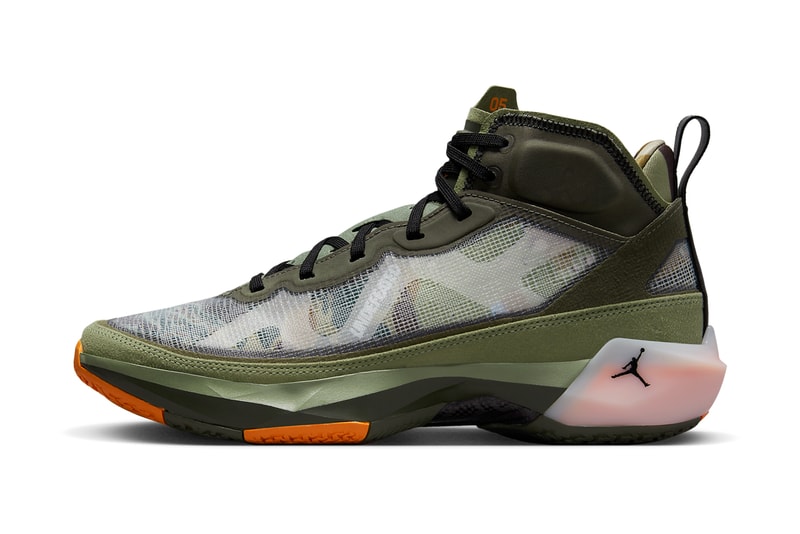 Lifestyle brand and sneaker store UNDEFEATED and international sportswear titan Nike have a lengthy collaborative history. From Dunks to Air Maxes to Air Jordans, the duo has covered plenty of ground in its time together. Most recently, the pairing has unveiled a series of collaborative colorful Air Force 1 Low looks. Now, the Swoosh has followed that up with official images of UNDEFEATED’s take on the Air Jordan 37.

Landing in a military green accented by a striking orange, this UNDEFEATED rendition of the Air Jordan 37 is presented in a classic look from the brand. Aside from the various co-branding, its color palette fits perfectly alongside previous releases such as the duo’s flight jacket-inspired Air Max 97 and unreleased Air Jordan 4. Various shades of olive green outfit the mixed material upper while camo detailing rests beneath a gray mesh that carries tonal “UNDEFEATED” text on the lateral. Further co-branding can be spotted at the tongue and custom camo sockliner, both of which carry UNDEFEATED’s iconic “5Strikes” logo. Lastly, the Formula 23-infused sole unit carries typical unique Air Jordan 37 geometry with green accented by orange and translucent white hits throughout.

Release details for the UNDEFEATED x Air Jordan 37 have not been officially announced by the Swoosh or UNDEFEATED. Look for it to launch sometime in the next year via Nike, UNDEFEATED and select retailers worldwide.

Elsewhere in the world of footwear, Jayson Tatum revealed the low-top version of the Air Jordan 37 during a workout at Duke University.