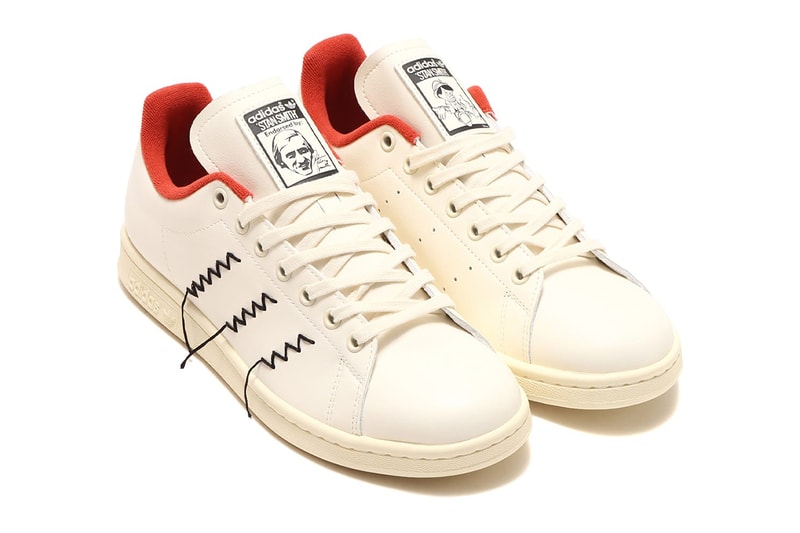 adidas Originals has shown the Stan Smith model copious amounts of love over the past few months. The classic tennis silhouette has seen numerous refurbishments, from a Doctor Doom rendition to a rounded ’60s update. Disney’s Aladdin recently received its own pair outfitted in Genie’s “Powder Blue” makeup. Now, more members of the Disney crew have secured their own designs as Kermit The Frog, Cruella de Vil, and Pinocchio make their debut.

The low-top shoe receives The Hundred and One Dalmatians character’s split-colored hair, outfitting the outer shell of the upper in white leather and the inner in black. For Disney’s humerus Kermit The Frog, the silhouette arrives with a pure white leather base, creamy accents hit the laces and soles, while vibrant green insoles receive Kermit’s recognizable tint. Finally, Pinocchio obtains the most thoughtful execution. Sail leather dominates the uppers entirely, adorned with exposed stitching hanging from the medial three stripes inspired by his puppet decor. Burnt orange liners are taken from his playful overalls, finished with insoles enriched by the cartoon.

All three pairs feature their respective characters stamped on the branded tongue tags, along with heel tabs that read Kermit’s catchphrase “it’s not easy being green,” extra laces and two sets of graphic insoles.

The adidas Stan Smith Disney Pack is available to purchase now via select retailers, such as Atmos for ¥13,000 (approximately $90 USD).