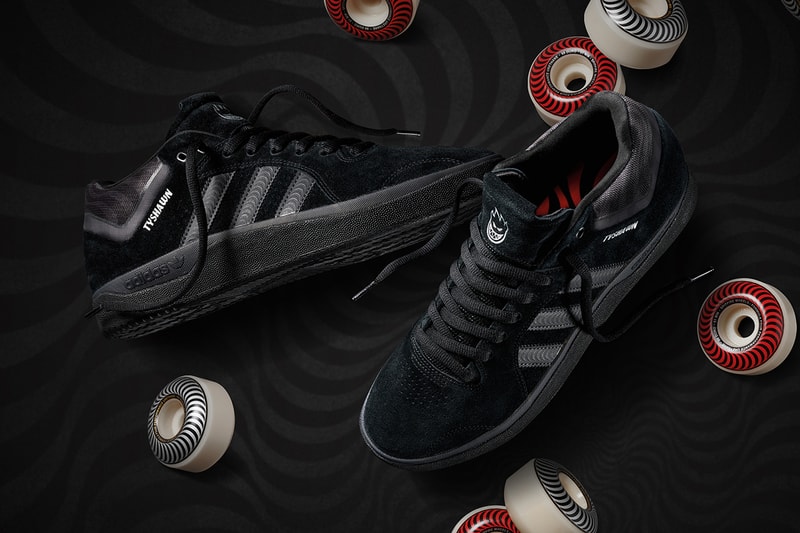 The Three Stripes brand tends to garner most of its attention for its initiatives alongside Ye and its performance innovations, but another component of the brand that tends to be forgotten is its ever-growing skateboarding line. The adidas Skateboarding team is home to some of the sport’s most decorated skaters from Jason Dill to Mark Gonzales to Tyshawn Jones, the latter of which is highlighting his signature sneaker with a brand new collaboration with Spitfire Wheels.

This latest project is a homage to Jones’ unique talent, and its visual presentation is a representation of the Big Apple. The kicks lean into a “Triple Black” motif as the uppers are fashioned with buttery suedes and leather-infused stripes. Tyshawn’s namesake has been printed on the collars, but it arrives in the form of Spitfire’s signature font to further nod to the three-way collaboration. The brand’s “Bighead” logo also arrives on the tongues. Psychedelic patterns are pasted to the heels and insoles, the former being executed in tonal fashion while the latter is formed with black and red stripes.

Interested in copping? The Spitfire x adidas Tyshawn is slated to release on September 24 via adidas for $95 USD.

For other news, a Black Panther-inspired adidas Ultra 4D has been revealed.