Queen Elizabeth II was known for her signature pearls, and Queen Consort Camilla, Kate Middleton, Meghan Markle and others paid tribute to her last night and today by wearing pearl jewelry, including pieces that belonged to the late monarch.

Photographed while en route to Buckingham Palace to receive Queen Elizabeth’s coffin on Tuesday, Middleton wore a triple-strand pearl necklace that resembled one from the late Queen’s jewelry collection along with a pair of Her Majesty’s diamond-and-pearl earrings.

Wearing a long-sleeved black dress with her hair worn down in loose curls, Princess of Wales looked somber as she traveled to the palace with husband Prince William, 40, for the emotional evening.

While it’s impossible to say whether the necklace was one of the Queen’s actual pieces, Middleton has never been spotted in a similar design. Her glittering earrings, however, were a long-term loan from Her Majesty that she wears often.

In addition to paying tribute to the late Elizabeth —  who died on September 8, 2022 at the age of 96 — pearls are traditionally worn during times of royal mourning.

“The royal tradition of wearing pearls for mourning dates back to Queen Victoria, who was so overwhelmed with grief when Prince Albert died that she wore nothing but black for the rest of her life,” Maxwell Stone of UK jeweler Steven Stone told Page Six Style.

“Occasionally, her black ensembles were broken up with jewelry — though it was always black, colorless or pearl,” he said, adding that the monarch had special brooches made to honor Albert as well as their daughter Princess Alice that featured a jet black pendant and single white pearl.

“The pearls were thought to represent tears — establishing a tradition that has lasted until the present day,” the jewelry expert said.

Today, members of the royal family followed the coffin on foot as it proceeded from Buckingham Palace to Westminster Hall, where Queen Elizabeth will lie in state until the funeral on Monday.

Middleton, who traveled by car behind the procession with Camilla, 75, wore a new black coat by Catherine Walker and a veiled hat along with meaningful pearl jewelry of her grandmother-in-law’s.

She sported Queen Elizabeth’s pearl-and-diamond leaf brooch, which was another long-term loan to Middleton from the Queen, according to Lauren Kiehna of The Court Jeweller. While the Queen rarely wore it, the Princess of Wales has donned the sparkling piece on several occasions since its first outing in 2017, the royal jewelry expert said.

Camilla, on the other hand, chose one of her often-worn four-strand pearl chokers with a diamond clasp along with pearl-and-diamond drop earrings.

Meanwhile, Meghan Markle, 41, who rode with Sophie, Countess of Wessex, wore a black Givenchy coat she’s sported before and the pearl-and-diamond earrings that were a gift from the Queen after she married Prince Harry. 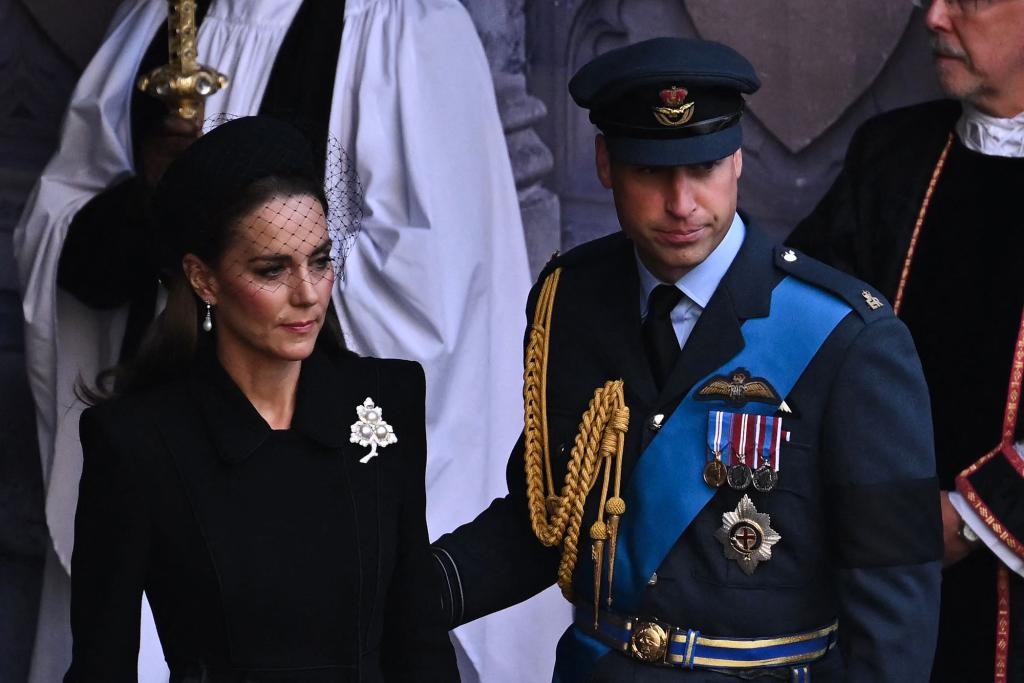 The Princess of Wales honored the Queen with her jewelry today. 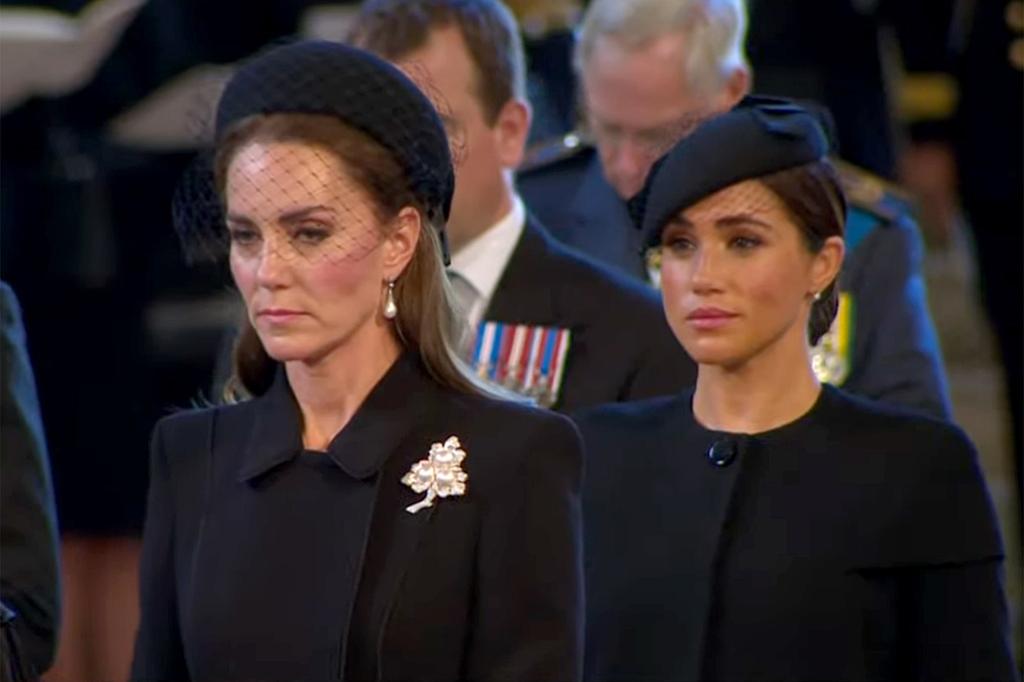 The Princess of Wales and Duchess of Sussex during today’s service. 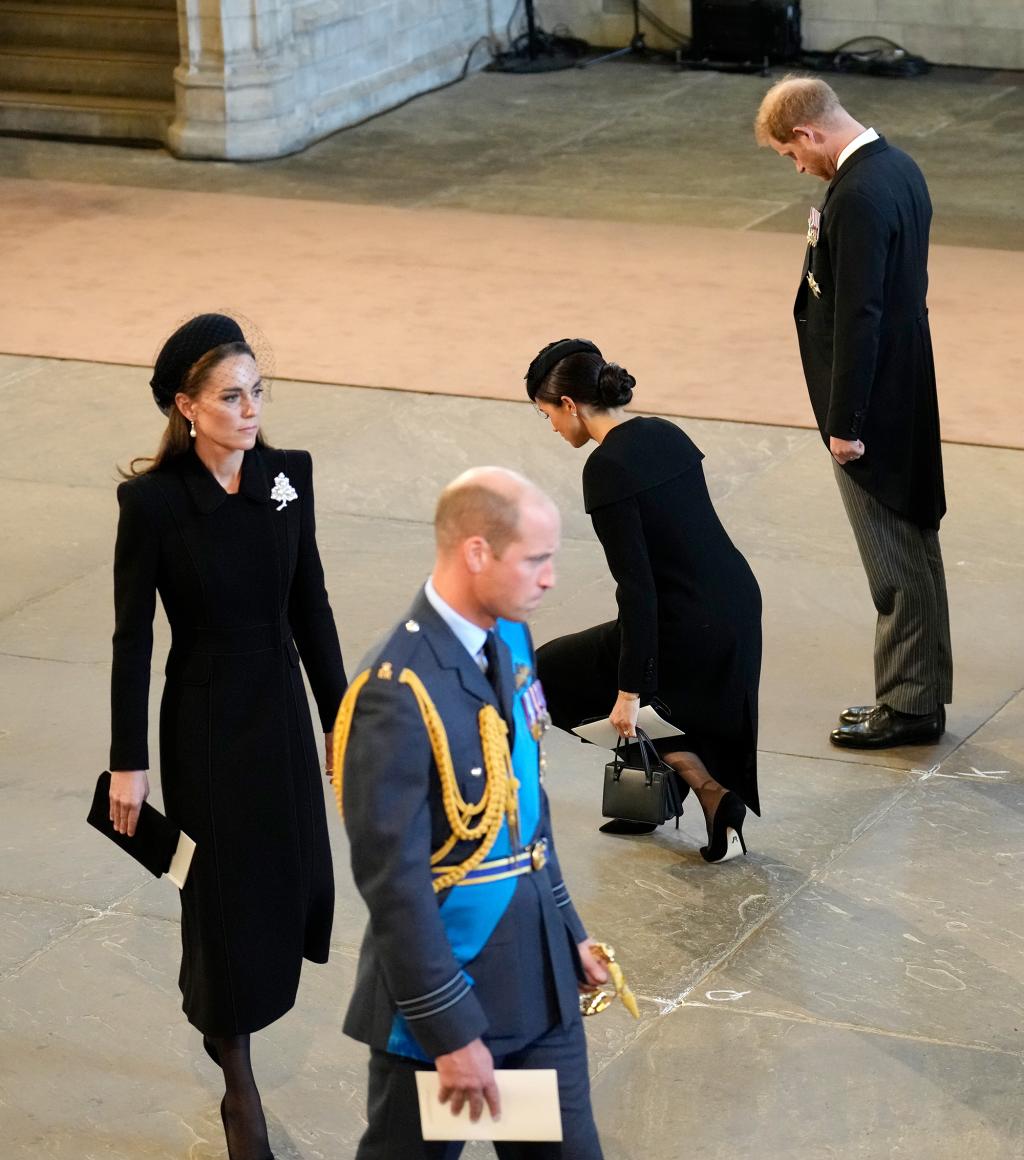 Members of the family gave one last bow and curtsy to the Queen before departing.

Page Six confirmed that the estranged brothers, as well as…

Expect to see more pearl pieces from the royal family at Queen Elizabeth II’s funeral, which will take place on Monday, September 19 at Westminster Abbey.