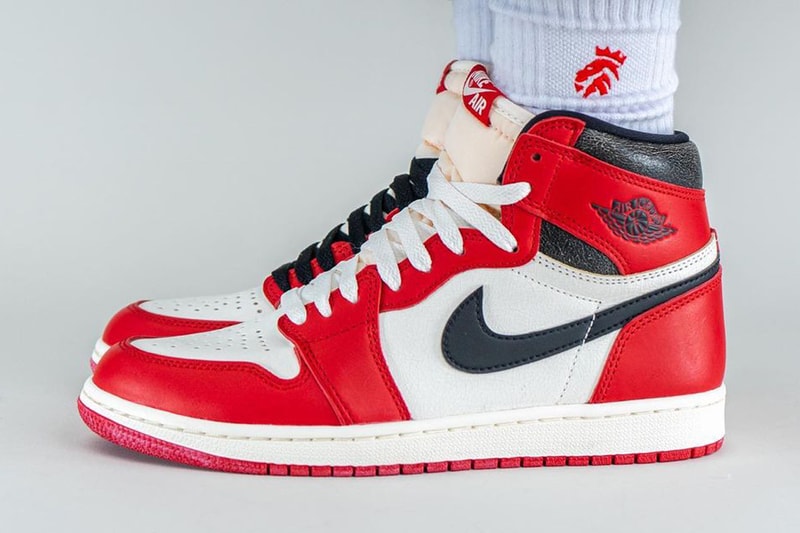 Since reports of an Air Jordan 1 Reimagined “Chicago” surfaced, there are few releases, if any, that have rivaled this upcoming Jordan Brand release in how much attention it has garnered. As the colorway’s name has been realized as the Air Jordan 1 High OG “Lost & Found,” we’ve been offered countless detailed looks at the sneaker. Now, on-foot images have surfaced, providing yet another outline of what to expect from the colorway.

While Nike has still yet to share official release information and imagery, most of the features have been discovered. Carrying the iconic “Chicago” color palette, the sneaker’s theme revolves around old-school detailing with its aged details and throwback references found in the packaging. To recap the colorway’s detailing itself, a white cracked leather base carries “Chicago Red” leather overlays and black on its Swooshes, trim, Wings logo and cracked leather collar. Lastly, the typical Air Jordan 1 sole unit finds itself outfitted with a white stitched midsole and red rubber outsole to complete the highly anticipated look.

Release for the Air Jordan 1 High OG “Lost & Found” remains set at November 19 via Nike and select retailers at a price of $180 USD. Check the pair out on-foot above and here’s to hoping for sneakerheads everywhere that Nike comes prepared with an immense inventory.

In other old-school footwear news, the Nike Air Ship “Team Orange” has been officially revealed by the Swoosh.