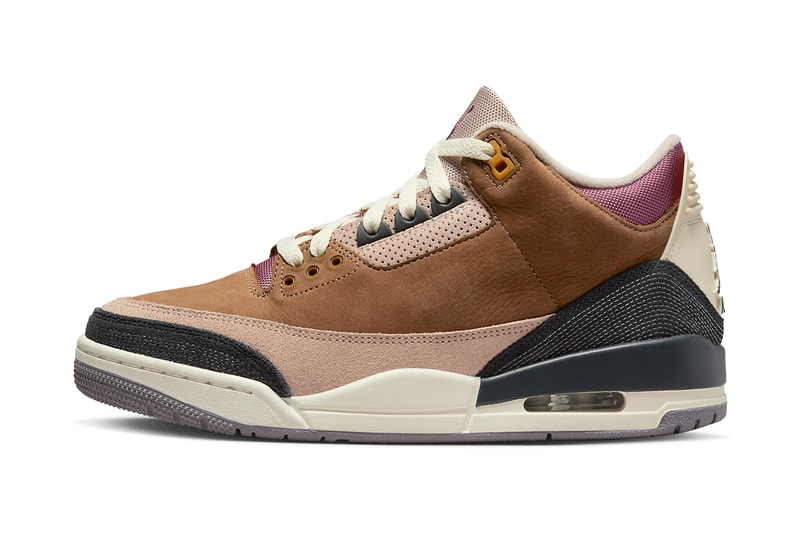 Throughout 2022, Jordan Brand has presented the Air Jordan 3 in new fresh looks. Unlike other silhouettes such as the Air Jordan 2, collaborations have not carried the Air Jordan 3 this year whatsoever as the sneaker hasn’t been reworked by another brand or designer since 2021’s A Ma Maniére look. Now, in preparation for the upcoming fall and winter seasons, the Air Jordan 3 has been upgraded with a winterized version.

Following an on-foot look at this “Archaeo Brown” colorway, Nike has now provided its official detailed imagery of the upcoming release. Outfitted in winterized suedes on the upper, this Air Jordan 3 favors an assortment of maroon, gray and brown shades. Maroon rests at the base of the tongue and heel, beneath the mostly brown hues found on the upper. The heel counter and mudguard in gray feature sashiko detailing in white to provide further texture to the sneaker. Lastly, the sole unit rounds things out with a visible Air unit surrounded by an off-white midsole that rests atop a light gray rubber outsole.

Release for the Air Jordan 3 Winterized “Archaeo Brown” is still expected to take place October 8 via Nike and select retailers at a price of $210 USD.

In other footwear news, official images have surfaced of the long rumored Trophy Room x Air Jordan 7 that celebrates the ’92 Olympic Games.