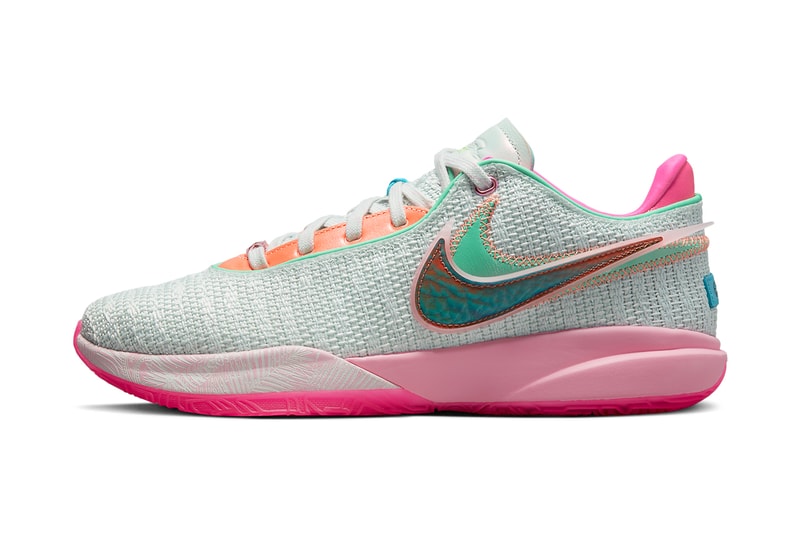 LeBron James, at the age of 37, is heading into his 20th season in the NBA. The four time NBA champion, eighteen time NBA All-Star and four time NBA Most Valuable Player has cemented himself as one of the best to ever grace the court. However, he’s not done writing history yet. Backed by sportswear giant Nike, James has launched a new signature sneaker in his Nike LeBron series every year. In continuation of this, the duo now presents the Nike LeBron 20.

Early looks at the LeBron 20 have popped up in a triple pink and Lakers colorway previously. Now, the Swoosh has shared official images of a “Barely Green” look. While we still await Nike’s proper unveiling of the sneaker, the detailed presentation of this colorway offers much information. First, the upper is a knit that lands in a mint green. An “XX” lace dubrae arrives in a shiny pink while each base Swoosh carries a seafoam green with contrast stitching outlining it. On the lateral, an additional Swoosh with an iridescent finish and pink outline rests atop the base Swoosh. Sole unit specifications have not been disclosed but a midfoot plate is visible alongside multiple shades of pink that cover the midsole and rubber outsole.

Look for the Nike LeBron 20 “Barely Green” to be available via Nike and select Nike Basketball retailers in the coming weeks at an expected price of $200 USD.

In other footwear news, UNDEFEATED has brought its signature military green to the Air Jordan 37.