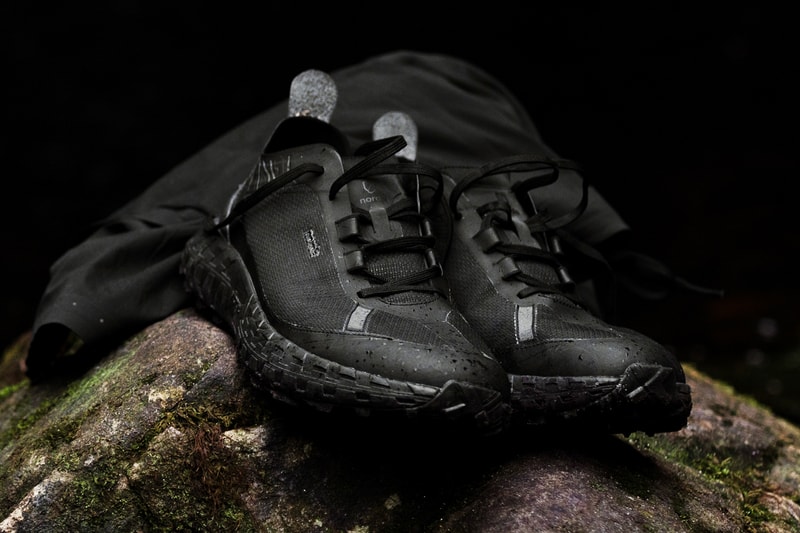 norda has garnered a committed following with their 001 running shoe, a premium model that combines high-end tech, sustainable materials and rugged trail style in a no-frills package. After linking with Satisfy for their first-ever collab back in July, the Canadian running footwear makers are back with their FW22 line, which is centered around two new “Stealth Black” iterations of the 001.

Arriving in both a standard iteration and a G+1 version that features a graphene membrane — or, in layman’s terms, honeycomb-patterned detailing — each shoe features an upper that’s made from Dyneema, the rugged fabric that’s used in everything from bulletproof vests to ropes and sails. Here, that Dyneema upper is bio-based, and norda touts it as the first-ever black Dyneema sneaker. “Dyneema fiber was [previously] only available in white, which limited our color options,” said Nick Martire, a norda co-founder. “Through a [year-long] development project with our weaving partner, we were able to achieve the stealth, triple-black nature of the product.”

Besides its advanced upper, the 001 “Stealth Black” features an ultra-durable Vibram SLE midsole, a special sole plate and Vibram’s Megagrip rubber on the outsoles, all of which aim to provide a shoe that can last for hundreds of miles on both the rugged trails and the smooth city streets. Besides the “Stealth Black,” the 001 is set to release in a new “Labrador Tea” colorway (images of which have yet to be revealed) and restock in the popular “White Gum” makeup as well.

The “Stealth Black” is also spotlighted in norda’s accompanying “3 Scots” campaign, which starts Ewan, Jamie and Lachlan MacLean, three brothers who are the fastest team of three to row the Atlantic Ocean. Their tie-in with the brand is a subtle yet meaningful one, as the boats they set records in feature ropes made from Dyneema, just like the 001’s upper.

You can cop the norda 001 in original “Stealth Black” now at the norda webstore and retailers like HBX. If you’d prefer the G+1 version you’ll be able to get it in November. The “standard” edition is priced at $285 USD, and the G+ iteration will arrive at $335 USD.

Elsewhere in the world of footwear, get caught up on Hypebeast’s weekly Sole Mates series, in which notable guests share the stories behind their favorite sneakers.