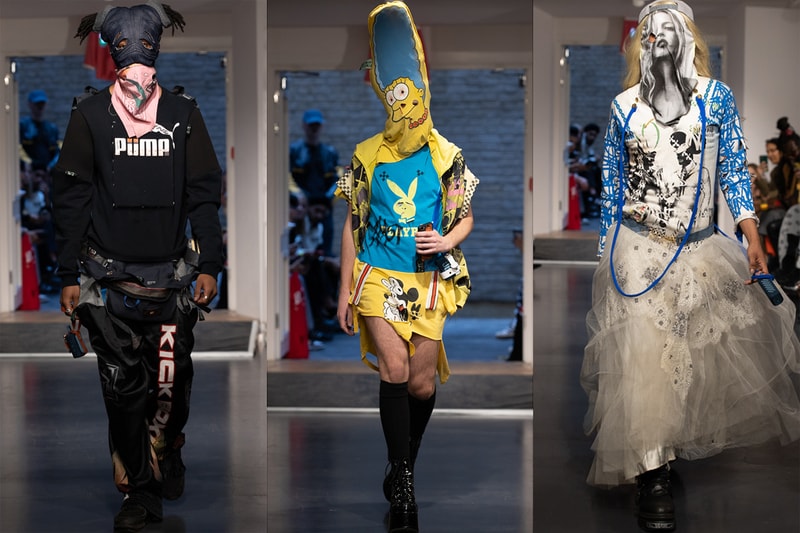 Established in 1996, Dr. Noki is a tried and true member of the sustainability movement — arguably being a founder of the word before it even really became a thing. Founding his namesake label under the legacy of London’s ’90s DIY rave scene, the revolutionary designer has always walked on a fearless path, carrying forward a message of rebellion.

NOKI aims to represent the voices of tomorrow, crafting upcycling garments handpicked from vintage landfills, alongside its mainline of head-turning distressed sportswear that feature melded logos and 1-of-1 streetwear couture creations. Now, he lands on the London Fashion Week calendar, showcasing the brand’s SS23 collection.

When we spoke to Dr. Noki in September 2020 about the legacy of Fashion East and offered an oral history on London’s industry-disrupting talent, he said:

“I was right in the thick of all these different crews from London, coming from Camden, Soho, Portobello. And it was the Shoreditch days proper: off my head, wrecked out my tits, surrounded by more people off their tits, wrecked and rave going toxic. I’m not really fashion-built; I’m not very good at being around the fashion industry. I did try, but it was going nowhere. Press was drying up. It didn’t really feel like I could go further with it, so I kind of pulled away and started working on my art again.”

However, his SS23 presentation felt smack-bang in the middle of this prior statement. It was anti-fashion in all the NOKI signature ways, subverting any kind of look that we’ve seen thus far this season. It goes against the norms. It says “I don’t care about fashion,” when perhaps maybe, you really do. That’s because, in a collection largely made up of upcycled and distressed clothing, bootlegs spiralling from his NHS iconography, references to the sportswear world and sneakers like the Nike Air Force 1 or adidas Originals Stan Smith sporting custom looks, it all comes together for someone who cares about their image, just not in a show-off kind of way.

It started with the label welcoming its choice of an intimate crowd into a room soundtracked by classical compositions and decorated with chairs wearing NOKI-customized T-shirts — with some playing on themes that appeared in the runway show. The atmosphere was one of pure excitement. Perhaps the morale was boosted because of the show notes, which instead of delivering lofty lines and hyperboles decided to outline the names of each artwork and look: “FACEBOOK STARTS WAR,” “KAREN WITH A K,” “MONKEY POX” and “SHREDDED MINIONS ZINE.”

Music then switched to JBL boom boxes playing different tunes per the model carrying it, Bluetoothed from their individual phones. From here, Hypebeast’s team reduced the presentation to something fit for The Purge, but that wasn’t a bad thing. Bootlegs were messed up, slashes were haphazard and then very precise to depict faces in the clothes, low-waisted elements combined with high-waisted add-ons to create subverted takes on traditional denim and track pants, which to us, is fashionable in its own right for all the best, twisted ways.

It was a rave. Onlookers brought the energy with their audible appraisal and consistent “oohs” and “aahs,” especially when looks that intertwined hair with the ensemble and artwork with the model took center stage. Models did whatever they wanted — Noki wore one look and threw tees into the crowd from the backpack of a model in front of him, while others pulled their clothes down, or up in other cases, posed for the cameras, served fierce energy on the runway, and ultimately helped make the show the energetic showcase that it was.

Take a look at the walking art that was NOKI’s SS23 collection in the gallery above. More of Hypebeast’s London Fashion Week SS23 content can be found here and on our new Instagram account, @HypebeastUK.

For more LFW content, here are the best trends from this week’s showcase.