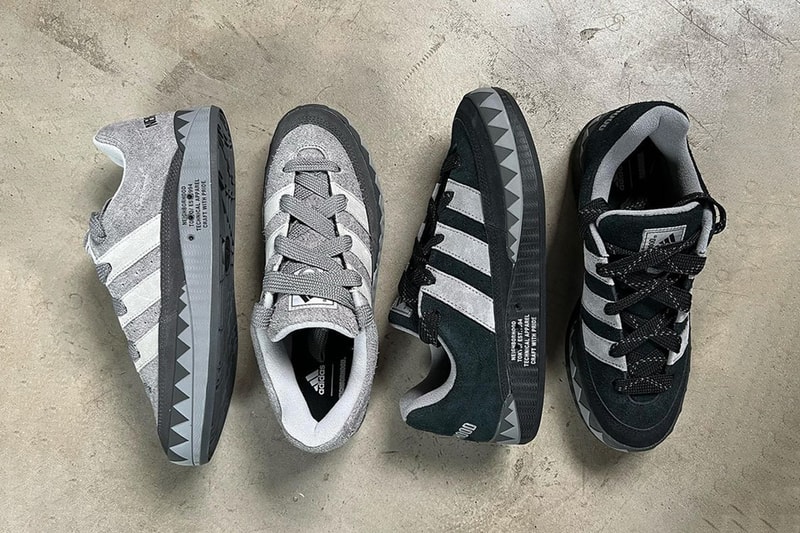 Both NEIGHBORHOOD and adidas are well known collaborators in the sneaker and streetwear worlds, including a lengthy history of working together. In June, the two connected with INVINCIBLE to outfit the adidas Campus once again. Now, the duo takes on one of adidas Originals’ latest retro silhouettes, the ADIMATIC. Reintroduced in 2022, the ADIMATIC has already been reworked by atmos and Human Made as it continues to trend in East Asian markets.

Two colorways have been revealed so far by NEIGHBORHOOD founder Shinsuke Takizawa via his Instagram. Both favor a monochromatic look made up of black and gray with a shaggy suede outfitting the base of each upper. Further suede detailing lands on the sneaker’s oversized Three Stripes branding while NEIGHBORHOOD branding arrives at the heel, tongue, sockliner and the midsole’s lateral. Conveniently enough, the ADIMATIC’s typical shark tooth midsole suits NEIGHBORHOOD’s design language perfectly as similar patterns have arrived on previous releases such as the NEIGHBORHOOD x adidas NMD_R1 Primeknit.

Look for the NEIGHBORHOOD x adidas ADIMATIC to release in both colorways in the coming months via adidas, NEIGHBORHOOD and select retailers.

In other footwear news, Hello Kitty has joined the Three Stripes for looks on the Superstar, Forum Low and Astir.