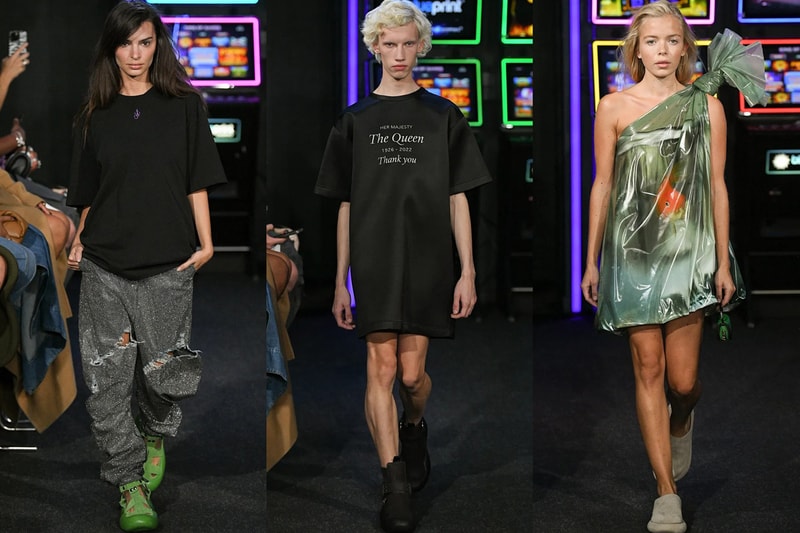 Jonathan Anderson‘s eponymous label, JW Anderson, had a momentous return to form for Spring/Summer 2023 in Milan. His menswear collection asked you to look deeper, not just observing clothes as vapid objects but ones that can intrigue, arouse, and dissect what qualifies as fashion. At the time of the show, Anderson stated, “As much as it is real, thus objective, it is all very subjective, and rather puzzling, or defiant, or insolent because of that.” He concluded that only the wearer can tell, and this all stems — as far as the fashion crowd is concerned — from his expansive amounts of creativity as the designer of LOEWE, a brand that has allowed him to push the boundaries wide open, in turn inspiring his eponymous label and bringing it back to its former glory.

In stark contrast to last season’s menswear presentation in a Milanese warehouse district, Anderson took to the disco lights of London’s Soho to showcase his Spring/Summer 2023 co-ed-cast womenswear range. Set inside Las Vegas Arcade — a Soho institution for night-time entertainment — the lights of slot machines and arcade games shone big money prizes (we, in fact, won £36), in turn setting the stakes high.

Oceanic sounds dispersed among the crowd who were now saturated in a mix of runway lights and neon hues, while models — including Emily Ratajkowski — paraded around with their winnings, that being JW Anderson’s nuanced understanding of high-end fashion combined with a sense of humor and a daring quality to make us question what is fashion at all.

From tributes to Her Majesty Queen Elizabeth II to orbs that encompassed the body in its mirror selfie-worthy curvaceousness, nothing was off the cards for JW’s house of fun. We finally found Nemo; as it turns out, he’s hiding in a bin bag dress that’s knotted at the shoulder like a fairground goldfish prize. Other dresses could have been mistaken for a metal scourer, or perhaps even a ‘90 desktop keyboard, seeing a few were deconstructed and turned into a halter neck piece.

But it wasn’t all just comedy, as bright orange funnel neck jumpers (albeit hung upside down on chrome hangers), puffy red leather shorts and a complementing white leather tank top, crinkled T-shirt dresses bearing bedazzled prints of Earth, architectural hoodies in stark white, sequin suits that doubled as disco balls, signature anchor-adorned tops, and of course, a bold array of new Bumper bags and equally-informed footwear all took to the narrow pathways between the machines.

Heels, glossy with holiday brochure-like tropical prints depicting beach getaways, ushered in Anderson’s teachings at LOEWE, while Bumper sandals got a gladiator makeover thanks to the addition of leg-scaling leather straps. The Bumper aesthetic appeared yet again as house-friendly slippers, and finally, as boots with the rear swapped out for branded webbing.

Altogether, JW Anderson’s SS23 womenswear collection continued his efforts in Milan with his menswear. There were familiarities — hangers instead of bike handles, clothes cascading off the body haphazardly, and a general smile-inducing charm to it all — but ultimately, it goes to prove that the British designer is back to putting his genius creativity into his own brand once again. All this, and it was his birthday.

JW Anderson’s SS23 womenswear collection can be seen in the gallery above, while more London Fashion Week content can be caught across Hypebeast and on our new Instagram account throughout the week.

For more standout shows, check out the SS23 collection from Dilara Fındıkoğlu.