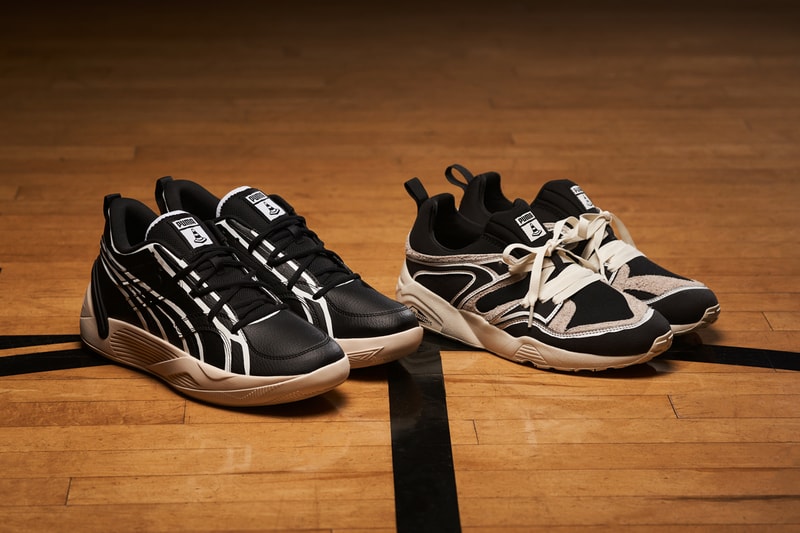 California-based artist Joshua Vides has exploded onto the scene in the past five years. Aside from his exploration of the art world, Vides has made noise in the footwear space with a sizable list of collaborations. Following the hype around custom shoes such as his Air Force 1, he later expanded his touch on sneakers with official Converse, New Balance and Suicoke collaborations. Now, he adds PUMA to the list with a basketball-themed collection of footwear and apparel.

Linework lies at the forefront of this collaboration, as one would expect considering Vides’ great success in drawing millions of eyes to his take on the concept. Looking at the footwear offerings, the PUMA Blaze of Glory, Trinomic and Trinomic Blaze Court are featured in colorways that balance black, white and off-white tones throughout. Vides’ signature traffic cone logo makes an appearance throughout these sneakers on the tongue as well as parts of the supporting apparel range. Clothing options begin with a black hoodie and sweatpants carrying white linework of a basketball throughout. A crewneck and tee in black and white respectively features an old-school themed sketch of two basketball players on the court to round things out. For the campaign, PUMA Hoops’ high school basketball star Mikey Williams is spotted in various looks from the capsule.

In other PUMA news, a collaborative collection with football superstar Neymar Jr. is on the way, including two colorways of the Slipstream and Leadcat slide.