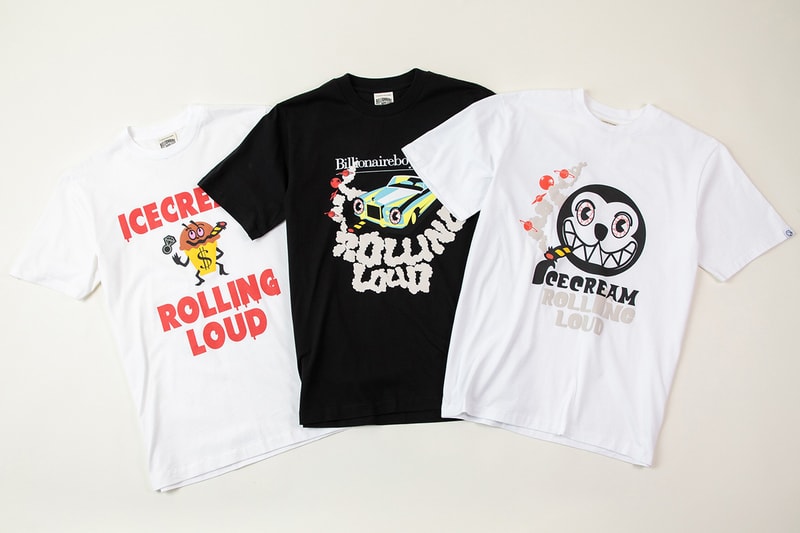 Rolling Loud — the global hip hop-focused music festival — is slated to take its festivities to Miami this weekend, and in honor of being one of the first major concerts to return post city re-openings, it’s partnering up with various entities for special products and experiences. After announcing that it would be linking with the WWE to bring Friday Night Smackdown to the festival, Tariq Cherif’s event will also be joining forces with BBC’s ICECREAM for a collaborative apparel collection.

Involved in this team-up are a trio of new tee design along with a duo of weed-friendly accessories. First on the roster is the black tee which comes adorned with a classic low-rider painted in South Beach-friendly colors along with BBC branding up top and smoggy “Rolling Loud” spell out below. The other two tees are white in background, one of which features “melting” co-branding along with a cheeky ice cream figure that has a cigarette hanging out of its mouth. The other option is decorated with planet shapes and BBC’s signature dog logo. Additionally, the two parties have whipped up an iridescent weed grinder and branded rolling papers.

Tees are priced at $60 USD a pop while the grinder costs $30 USD and the rolling papers will run you $6 USD. The collection will be available exclusively at BBC ICECREAM’s Miami store and online starting at 12PM EDT on July 22.