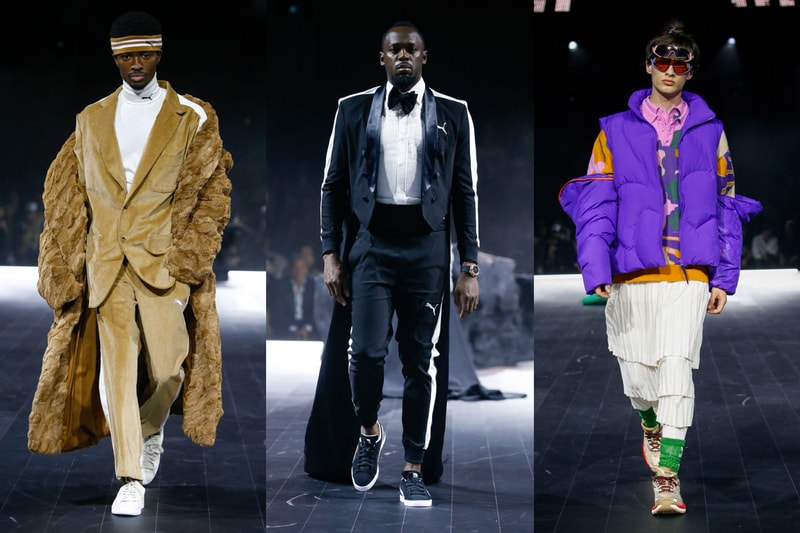 On Tuesday evening, Cipriani’s majestic Great Hall put its high-society banquets on pause, transforming into a monumental destination for PUMA‘s grand return to New York Fashion Week. LED screens flanked either side of the revered New York building’s Italian neo-renaissance interior, televising the MO for the evening — “Forever Faster” — above a bouldered platform. Therein lay the groundwork for PUMA FUTROGRADE, a collection saluting the sportswear label’s old and new, letting the past reinvent itself for the future under the creative jurisdiction of June Ambrose.

Bright lights cued the entrance for the first round of looks, which included six ensembles denoted by a monochromatic beige tone and a subtle, all-over PUMA monogram. But after just a taste of the collection, two freakish squads— one dressed in all-black looks and the other donning monochromatic red — emerged from either side of the platform and abruptly broke out into an avant-garde dance battle under dimmed lights. Amid the choreographed chaos, it became clear that their runway rendezvous was a foreshadowing for the line’s black and red sportswear iterations that promptly bounced down the runway next.

Tracksuit jackets and pants honored PUMA’s heritage, stamped with the imprint’s timeless T7 formstrip and applicquéd with its iconographic leaping motif. One model wore an oversized, helmet-inspired hat, nodding to the brand’s deep roots in athletics, and more introduced leather jacket-and-pant sets, thick coats, voluminous hoodies, puffer vests and form-fitting bodysuits. The fashion spoke for itself, but when eight-time Olympic gold medallist Usain Bolt appeared on the runway, draped in a branded, black tuxedo with a dramatic train, PUMA’s high-caliber legacy in sports felt unprecedently actualized on its runway.

“It’s pretty cool, and I’ve never seen anything like it,” Bolt, the greatest sprinter of all time, told Hypebeast of his look. “Puma’s been a big part of my life because it’s been 20 years now since we first partnered, and they have helped me reach all corners of the world.”

One model then impressively balanced nine logo-hosting hats in several saturated tones, almost as if to symbolize the bevy of collaborations that subsequently entered the scene. Among them, Palomo Spain altered Puma’s sporty silhouettes with a genderless approach and a ’70s-inspired color story, while AC Milan commemorated Paninari subculture via premium woven labels, personality-punched patches and embroidered details.

A standout, Harlem’s very own Dapper Dan crafted a capsule galvanized by the notion of pre-game style with an emphasis on luxury upcycling and knitted materials. Most notably, the collaboration donned his sartorial signature: logo mania, or, as he puts it, the “implementation of symbols that personify luxury.” Between a crystal-covered tracksuit boasting a “DDP” monogram and an abstract puffer jacket that turned two silhouettes into one, the line expertly showcased sportswear and high fashion’s convergence. For Dan, that tasteful crossover is “the best thing that could’ve happened to fashion.”

“It’s comfortable, accessible and allows for the creation of true classics,” he told Hypebeast.

The following looks articulated PUMA’s liking for experimentation, turning puffers into skirts, plastering metallic fabrications on sharp-shouldered jackets and utilizing its signature logo as a centerpiece on an all-white bodysuit. For the finale, a model bounced down the runway in an inflated, beige jacket embossed with the brand’s logo on its back, cleverly offering a snapshot of what fashion’s far-away future may resemble.

“I want this concept to challenge the audience to be creative with their present, as they forecast what’s next,” Ambrose said, reflecting on her NYFW debut as the brand’s lead visionary. As the final carousel made its round, the designer’s ambient aspiration found total clarity, provoking viewers with the versatile, forward-minded ethos that makes up PUMA’s fortuitous future.

Indulge in PUMA FUTROGRADE in the gallery above.