Every season, celebrities flock to New York Fashion Week to sit front row at the shows and dance the night away at designers’ parties — but during the September 2022 collections, no star commanded attention quite like Julia Fox.

In addition to taking in the latest collections from NYC talents like LaQuan Smith and Jonathan Simkhai, the “Uncut Gems” muse made head-turning cameos at the Harper’s Bazaar Icons bash and Vogue’s Boom Boom Room shindig, and even hit the runway for Tommy Hilfiger.

Famous for her fearless fashion sense — who could forget the time she went grocery shopping in her underwear, or dared to wear the world’s most dangerously low-rise leather pants? — Fox didn’t disappoint with her NYFW looks, which included everything from an pearlescent, heavily pierced “naked” dress to a bandeau bra seemingly made from duct tape. Below, see all her over-the-top outfits.

Fox kicked off the week in a Luis De Javier design complete with a caged corset and grommet-studded strap that dangled all the way down to the ground, carrying a matching By Far bag accented with the same silver hardware. 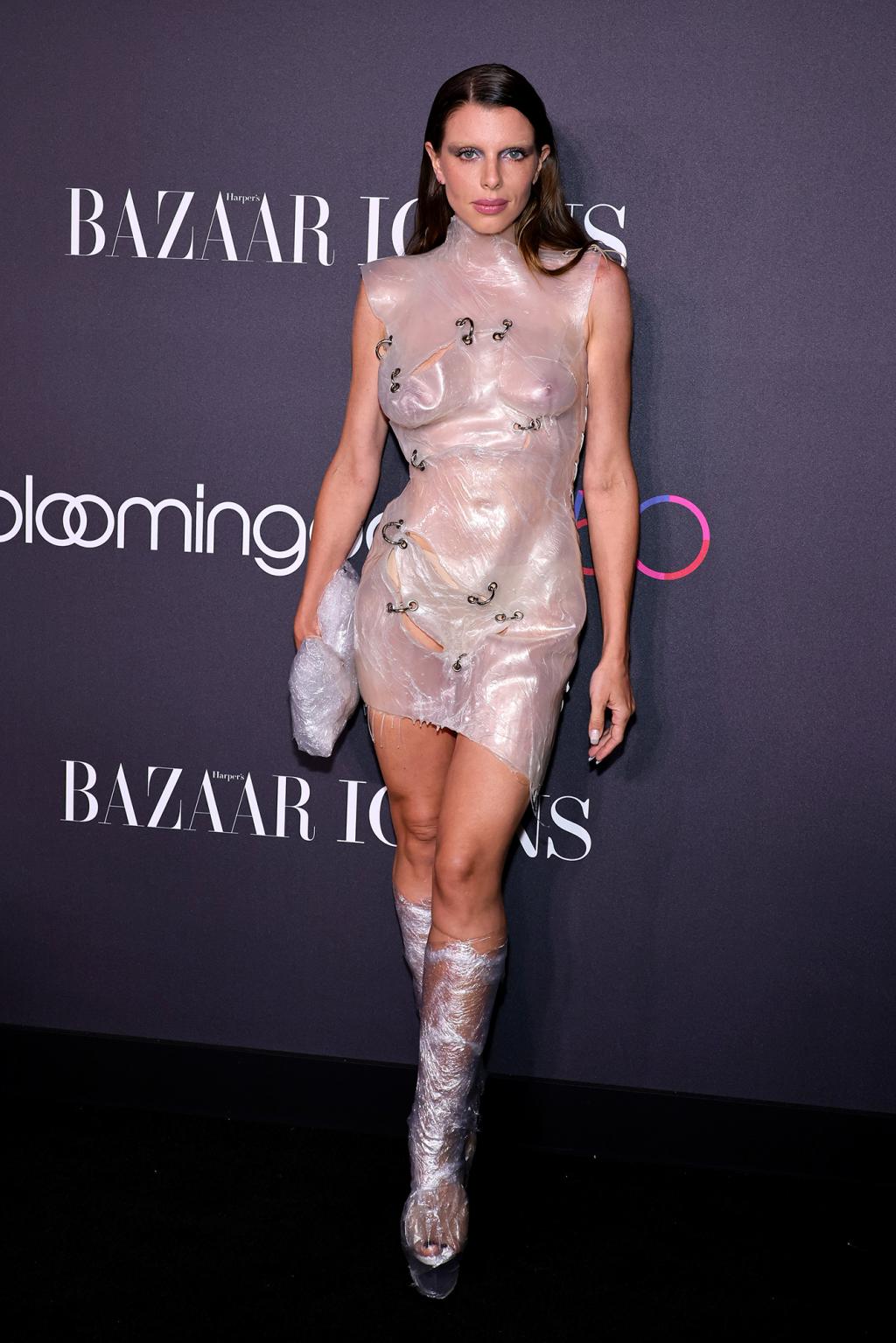 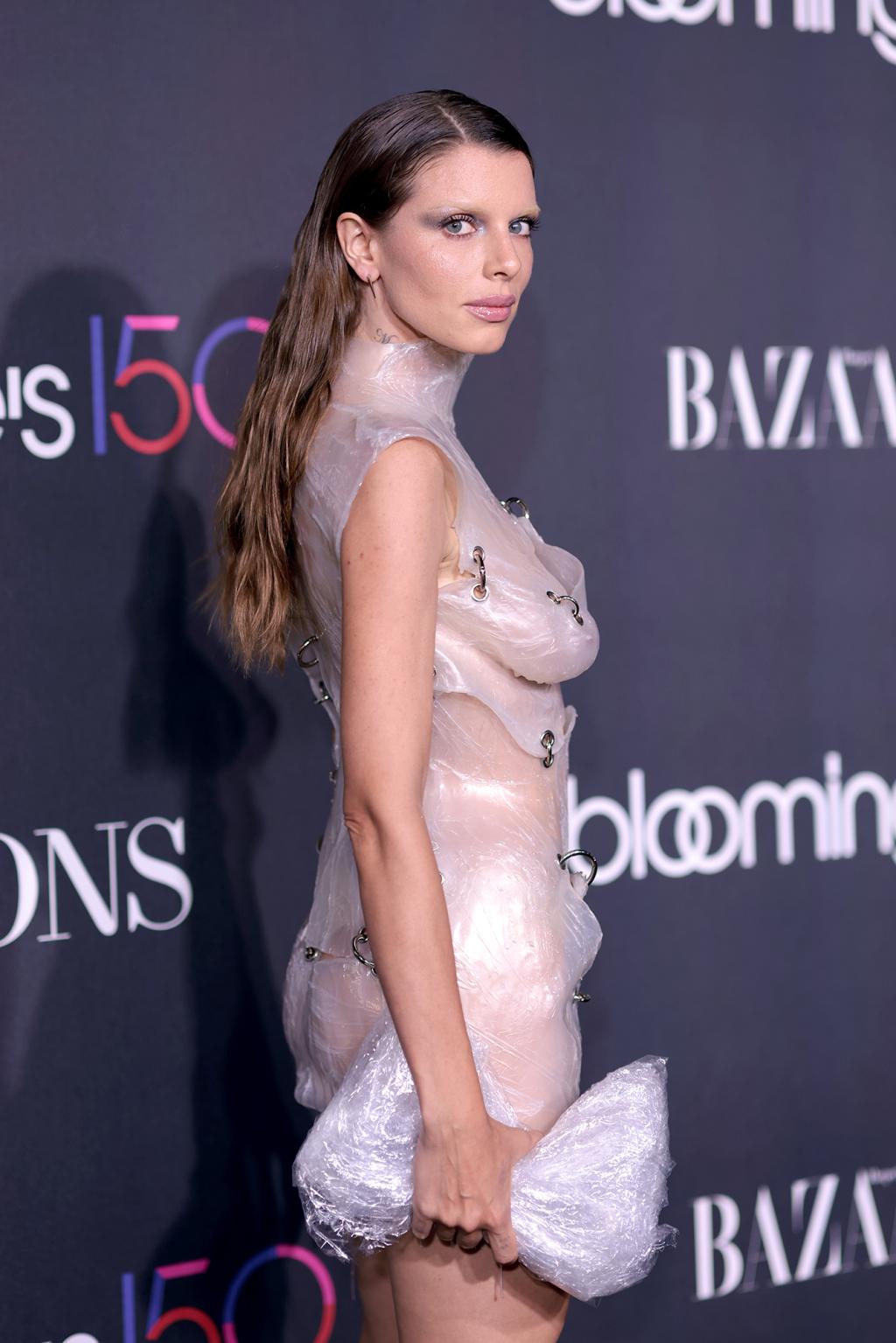 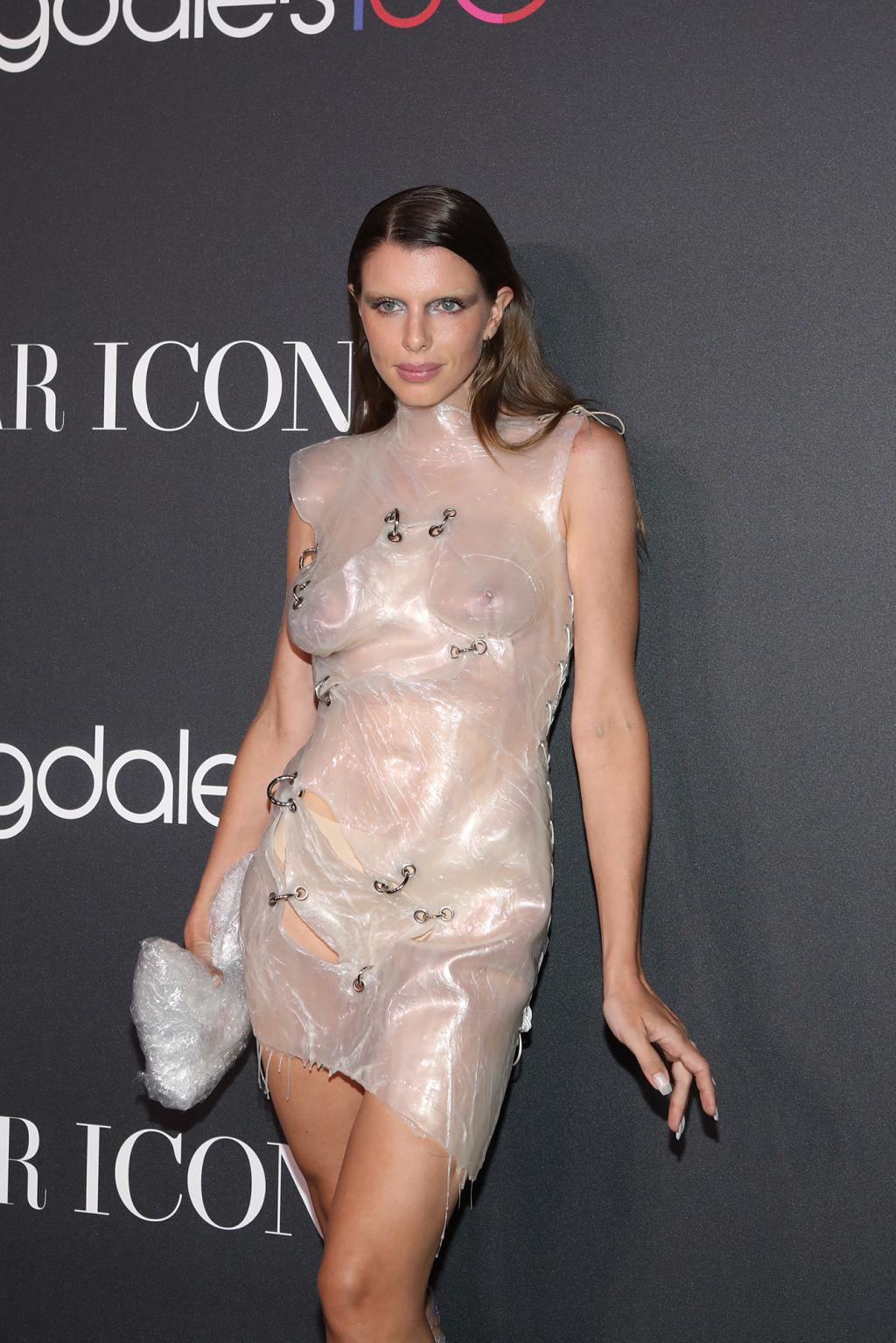 For the Bloomingdale’s 150 x Harper’s Bazaar Icons bash, Fox teamed her see-through, cellophane-like Joanna Prazmo dress with a DIY clutch and platform boots she fashioned from actual Saran Wrap an hour before the party, as she told Bazaar.

Fox showed up at the Elena Velez show with son Valentino in tow — and the duo even matched in glossy black getups.

Kanye West’s ex was spotted out and about in an avant-garde pair of Junya Watanabe trousers teamed with what appeared to be a single, strategically placed strip of duct tape across her chest.

No pants, no problem

Less than a year after making her runway debut at NYFW, Fox returned to the catwalk during Tommy Hilfiger’s drizzly outdoor show, modeling a striped knit bodysuit and patterned tights.

At LaQuan Smith, she wore a faux fur shrug, matching purse and black bra top with a raw-edged miniskirt similar to the one she once DIY’d using a men’s Hanes tank. 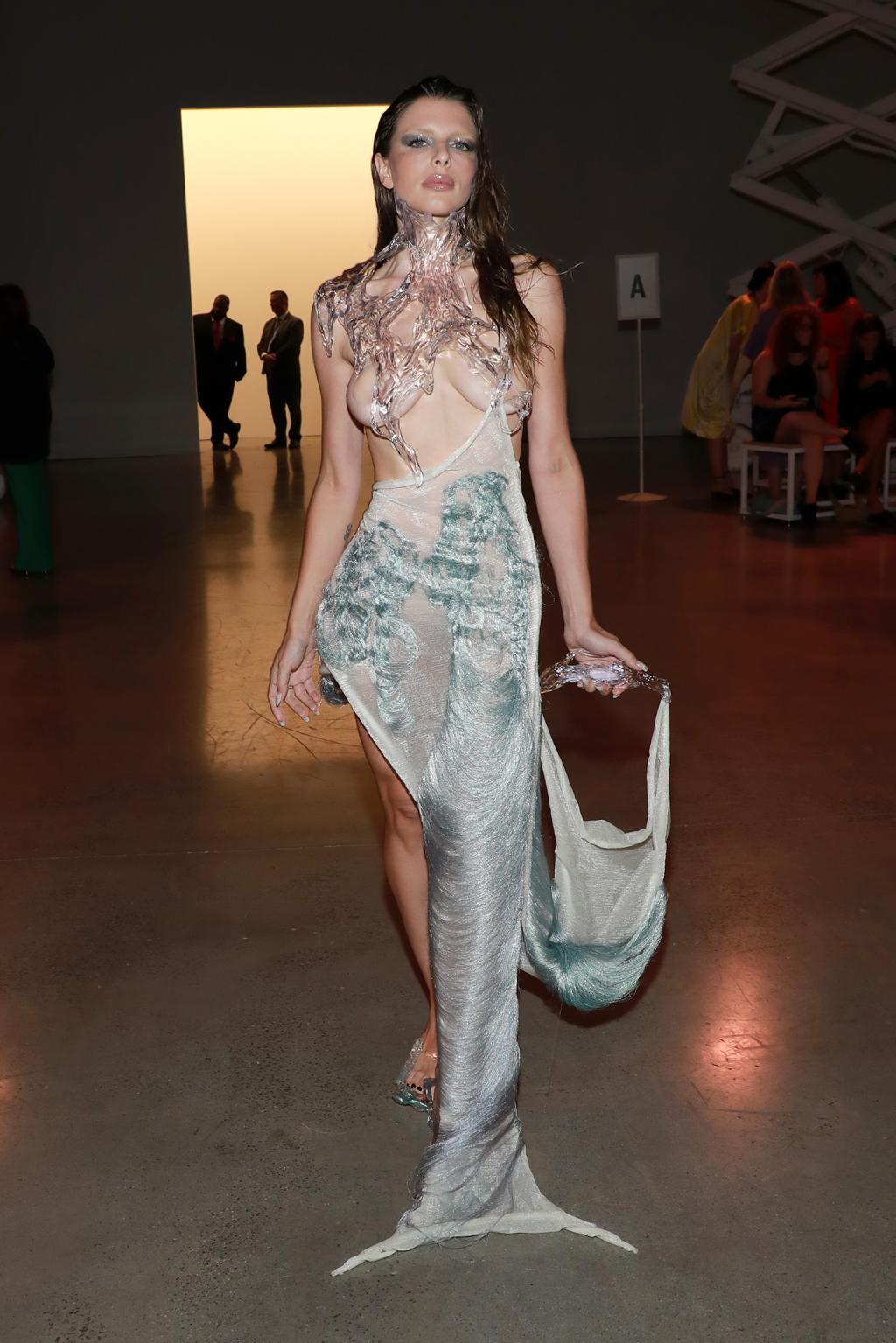 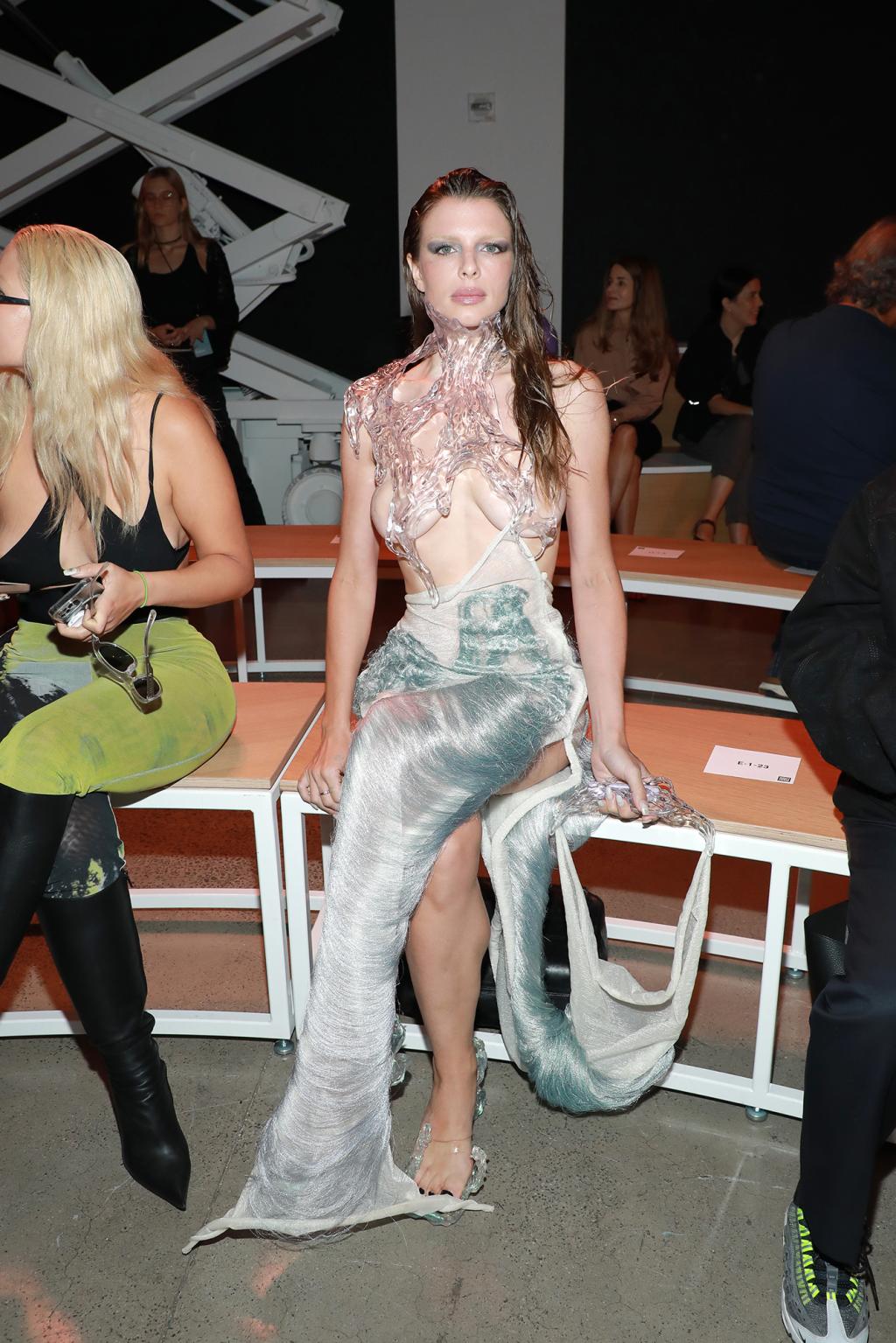 Fox was the talk of the Parsons MFA show, where she arrived wearing a clear acrylic bustier by one of the student designers, Weiran, make to look like water cascading down her chest. Her wild look also included a seafoam-hued mermaid skirt covered in fringe.

The actress was snapped arriving at the Jonathan Simkhai show in a moto-inspired ‘fit consisting of biker gloves, unzipped (and underwear-flashing) leather pants, a matching jacket — and absolutely no shirt.